A .csv file should then be created ready for Import, an example file can be downloaded for editing by clicking on More Help.

When opened, the following headings will appear at the top of the example .csv file (columns A to L inc’ in MS Excel). These fields define how the Group(s) are set up upon Import. Definitions and examples for each field are included in the table below.

Note: there is no option to ‘Create a Smart View’ when creating Groups using the Import method. Therefore, this method is not appropriate if Groups are being created in order to easily filter the Grade Centre view.

The example below should create a Group Set called Tutorial_Groups_2020/21 containing two Groups that are available to students, can be personalised, are not available for Self-Enrol, that have no maximum number of members and that will show each student who is in their Group with them.

Note: all columns must be present in row 1 in the saved file. Below, columns J to L are not in use but the headings must remain for the import to be successful. Please do not apply any formatting to any of the data.

The dataset above is saved as a .csv file, this format should be the default as it was created using the example Blackboard file. I have named the file ‘Tutorial group creation testing’. The .csv file is now closed.

Back in Blackboard, under Tool Availability, select the Tools to be added to the Group(s) being created. In this example the Group Discussion Board has been selected. 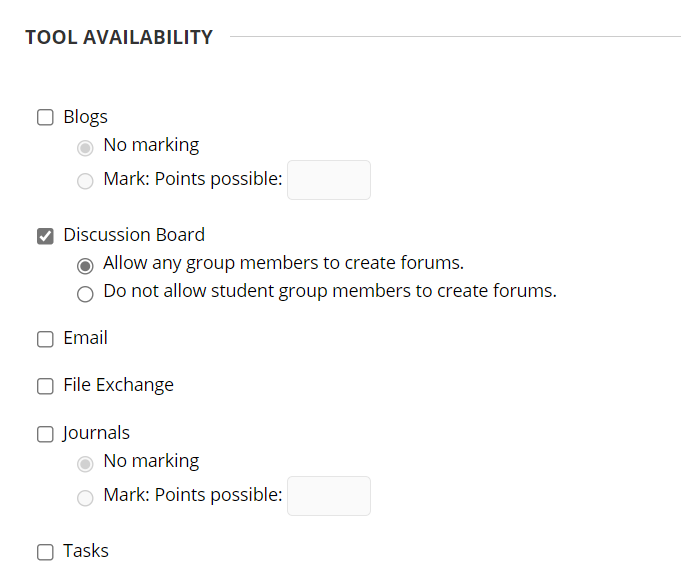 The following message will be displayed,

await the email from bbtutor-enrol@dmu.ac.uk.

Click through to a Group to check the correct Tools are enabled.

To check the Group Set, click on Group Sets.

As before, from Users and Groups>Groups, click the Import button.

A .csv file should then be created ready for Import, an example file can be downloaded for editing by clicking on More Help.

The .csv file will include two headings; Group Code and User Name.

In this test I will use the Group Codes from my two newly created Groups and I will include a third Group Code to see if Blackboard can create a Group using this method too.

I will also see if usernames (pnumbers) can be added using a comma separated string in column B rather than having to include a row per student.

Firstly, here’s my completed .csv file with usernames appearing singularly in column B. I have included a third Group in column A with two usernames, this Group does not exist on the shell as yet. 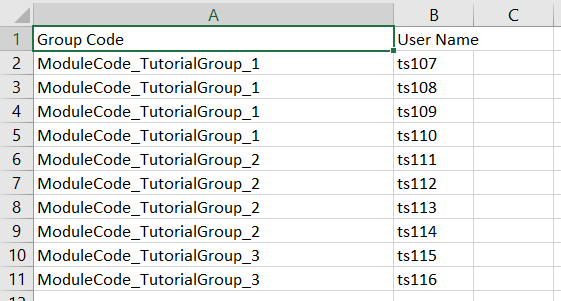 Having saved the .csv file, click on Browse My Computer under Import Group members.

As before, the action will be queued and an email received when finished.

Having refreshed the page, it appears as though the Import failed to create the third Group but has enrolled the other eight students into the two pre-existing Groups.

I will now re-run the entire Import both with the remaining two students having been allocated an existing Group in the .csv file.

The re-run has successfully allocated the two previously unallocated students and has not affected the other eight students. Note: this is an important test as these Groups will need to be re-run/updated as students leave/interrupt/defer etc.

Finally, I have removed the student enrolments and re-run the Import but with usernames being comma separated in the .csv file. This is a technique often used when enrolling colleagues onto shells as the UserName field behind ‘Find Users to Enrol’ can accept a continuous, comma separated, string.